The FBS algorithm has been recently mapped [12] on GPUs with CUDA. Compared to the original CPU implementation, the GPU version of FBS on a medium-class NVIDIA 460 GTX GPU, allows to obtain speed-ups > 70X (i.e. 300 ms on Teddy and Cones) with equivalent results. On a high-end Tesla C2070 the measured speed-up is > 100X (i.e. 200 ms on Teddy and Cones) . Additional experimental results are available here.

FBS combines the effectiveness of state-of-the-art cost aggregations strategies, that adapt their weights to image content, with the efficiency of fast incremental calculation schemes (i.e. integral images or box filtering) typically deployed by conventional stereo matching algorithms (often referred to as correlative approaches). FBS computes the weights on a block basis and the matching cost on a point-basis; this strategy enables, in both cases, to deploy efficient box-filtering (or integral images) incremental calculation schemes.

The block basis weight computation dramatically reduces the number of operations and enables to increase robustness to noise. Experimental results show that FBS has an accuracy comparable to top performing state-of-the-art cost aggregation strategies (a complete evaluation of cost aggregation strategies, including FBS, is available here). Nevertheless, the execution time is significantly reduced (you can evaluate the performance of the FBS algorithm downloading the software implementation available below). Moreover, it is noteworthy that the performance of FBS can be significantly improved deploying the LC technique proposed in [11].

Further details can be found in the ACCV09 paper and in this presentation
SOFTWARE
The implementation of the FBS algorithm for Linux and Windows (tested with Linux Ubuntu 10.04 (32 bit) and Windows 7 (32 bit)) is available here: software (last update: August 12th, 2010). Please, read the README.txt file for further details. The code was written in C/C++ and requires (for reading, saving and displaying images) the open source OpenCV library (tested, on Linux and Windows, with version 2.1) available at:


If you have any question feel free to contact me, Stefano Mattoccia, at:

FBS vs AW, SS, SB, Rel, VW: experimental results on the Middlebury dataset [8]
The FBS approach has been evaluated on the Middlebury site and the results are available here (FBS is referred to as FastBilateral). Moreover, FBS has been compared to state approaches according to the CVPR2008 paper [9]; experimental results are available here. Among state-of-the-art aprpoaches evaluated in [9], FBS is ranked 2nd (see here for details). Below are reported the supports extracted in the 6 points defined in [9]. The FBS approach has also been deployed in conjunction with the Locally Consistent (LC) technique [11] (see here for details) ranking 1st according to the methodology described in the CVPR2008 paper [9]. 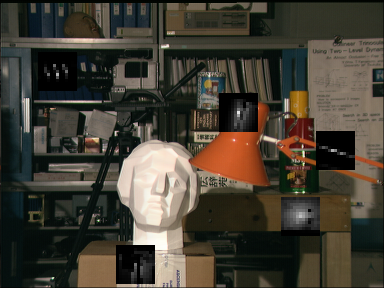 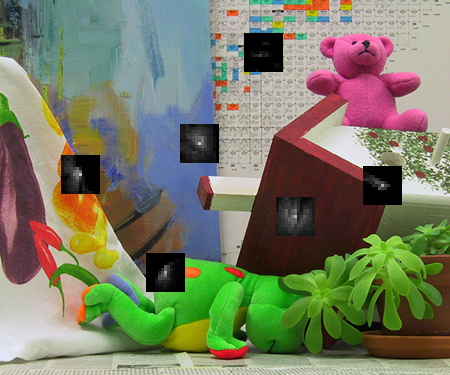 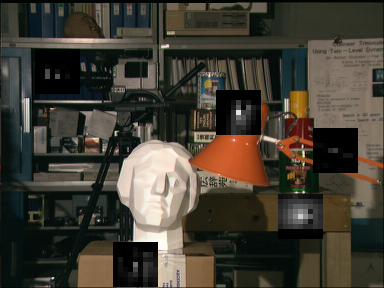 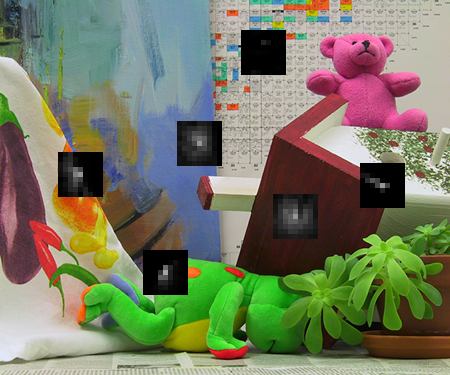 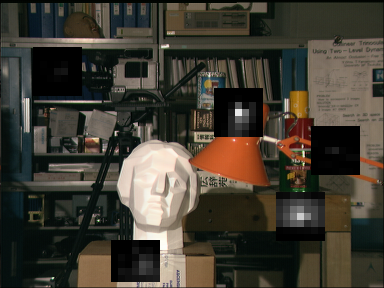 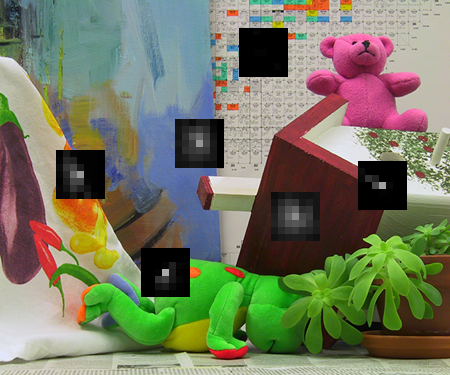 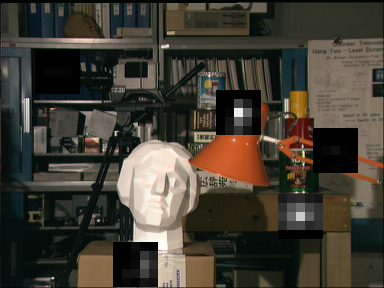 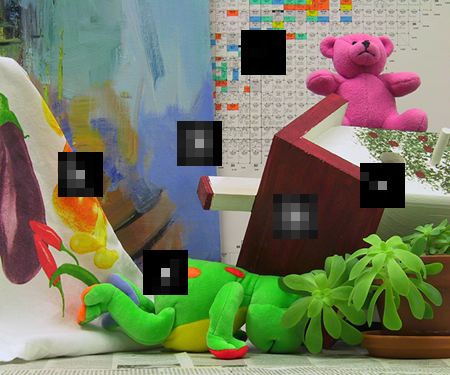 Below are reported the disparity maps on the Middlebury dataset [7,8] computed by FBS and the 5 top performing cost aggregation strategies according to [9]. For Adaptive Weights (AW) [2], Segment Support (SS) [3], Segmentation Based (SB) [4], Reliability (Rel) [5] and Variable Windows (VW) [6] the disparity maps are concerned with the original algorithms proposed by the authors (these disparity maps are available here, section "Original"). For each algorithm the execution time, on the same Intel Core Duo 2.14 GHz processor, for the Teddy stereo pair is reported. For Segmentation Based [4], differently by [9], we report here updated and improved execution time.

FBS vs AW: additional experimental results on the Middlebury 2006 Dataset [8,10]
In this section we report additional experimental results concerned with FBS and our implementation of AW [2] on the Middlebury 2006 Dataset [8,10]. For both algorithms we deployed the optimal parameters found  on the previous dataset (i.e. Tsukuba, Venus, Teddy, Cones). From left to right, we report: the reference image, the groundthtruth and the disparity maps computed by FBS [1] and AW [2].

If you are interested in stereo vision, you might find interesting this:
Stefano Mattoccia
"Stereo vision: algorithms and applications" [

]
Extended version of the talk given at the University of Twente, April 1st 2009